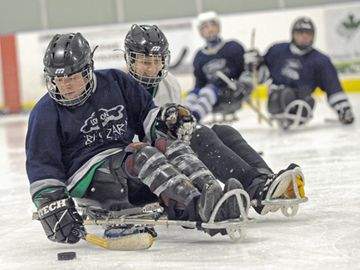 Raising the Profile of Our Paralympians

When Darda Sales returned to London from competing in two Paralympic Games as a multiple medal winner, her reception wasn’t even half the bluster of an Olympian coming back home.

“(Sales) was a paralympian champion, she showed up at the airport and nobody was there,” said Murray Howard, co-chair of the London Accessible Sports Council (LASC), about his partner in the group. “The two figure skaters from Ilderton (Tessa Virtue and Scott Moir), they come home and there’s hundreds of people lined up to see them. That’s the interest we’ve tried to build the last few years.”

The glory of being a world champion is no doubt great for anybody, but maybe more personal for someone with a disability shown in the contrast between Sales and the 2010 Winter Olympic gold medalists who started their career out of the Ilderton Skating Club.

Most people in London and Canada don’t even know where to find their local disabled sport programs, let alone the athletes— that includes someone with a disability as well.

Based on a 2006 StatsCan survey, the Canadian Paralympic Committee announced in December that only three percent of Canadians with a disability between the ages 5 and 54 participate in organized sports.

Murray remarked that many area organizations struggle to get athletes involved.

“Our program is largely underused. We don’t have a lot of people tapping on our door, which makes it difficult. We’d love to have lots of interest out there.”

It doesn’t matter if it’s a summer program like boccia ball, a winter specialty like sledge hockey or an all-around activity like swimming, disabled sports aren’t resonating.

The issues, according to Howard, range from media coverage and advertisement to a player’s ability and transportation. In the end though, all the difficulties lead to trouble in recruitment.

Ernie Comerford said only two or three tried out wheelchair curling in 2007-08, the first year he established the sport in the London area. “Over the years, I might have had maybe 20 people try it.”

The long-time curling coach has done just about everything to enroll players into his program, including demonstrations at malls, setup with plastic rocks to push, to show people the game. In at least eight all-day demonstrations, he’s only managed to recruit one person.

The Paralympics have seen some small headway, but a lot needs to get done. While the 2012 Summer Olympics were played non-stop on several channels, the Paralympics were designated to a 30-minute daily highlight show in the evening—which is more airtime then it was usually given.

It might take some time before a Paralympian is greeted with the open arms of more than just their friends and family when they return home from competition, but if the CPC can move up to an Olympic standard then they could easily be welcomed by envious fans.

“In the last two years, in the last Olympics, the one they had in London and just had in Vancouver, there was a lot of interest in the Paralympics, “ Murray said. “They play the entire Olympics and cap with a couple of nighttime shots of the Paralympics. It’s just a little a bit that needs to get pumped up to get people involved in. Not just for those who want to participate, but a fan base also.”